From Monday, a free Christmas Shuttle to Chadstone began operating from Caulfield Station (south side) to Chadstone Shopping Centre (outside David Jones). The service is being provided by CDC with a specially stickered "AOA" bus, being ex Driver number 34, a single door Denning with 3 plus 2 seating. The service runs hourly (on the hour from Caulfield and on the half hour for the return journey).

Here is a shot taken this morning at Caulfield:

The only advertising of the service at the station is a sandwich board at the stop, with no details of the timetable:

I presume that the rationale for the service is to enable overflow Chadstone car park patrons to park at Caulfield and catch the bus. However, this morning at least, the racecourse car parks were closed except for the Monash University pay/permit one. Most of the rest of the curb side parks were taken by rail users or are time limited. Not surprisingly, they were no passengers for the service.

Forty seven years ago, Chadstone Shopping Centre was still in its infancy. The bus service from Caulfield Station was operated by E C Nicholls with three normal control OB Bedfords, two with Cheetham & Borwick bodies and one with a slightly larger Grummet body. The route, dating from 1924, began at the corner of Burke Road and Malvern Road in Gardiner and ran up Burke Road into Caulfield. It was extended to Chadstone in 1960 when Chadstone opened. Here is a shot of one of the C&B buses leaving Caulfield Station (north side):

At Chadstone the bus awaits its return journey. Then, all of the bus stops were on the main drag - much more convenient that any subsequent arrangement:

The last two photos were taken by Bruce Tilley.

I like that they've put the AOA over the destination window. Very different.

Has the staff car park shuttle started yet?
Top

IMO, one of the better Xmas AOAs I've ever seen. Thx for posting system improver
Top

system improver wrote:The service runs hourly (on the hour from Caulfield and on the half hour for the return journey)... Not surprisingly, they were no passengers for the service.

No wonder there were no passengers, the frequency leaves a lot to be desired.

This is it I believe.

The views expressed by me are mine and mine only. They do not neccesarily fall in line with the views of my friends, family, collegues or my employer.
Top

That's what I took yesterday morning. 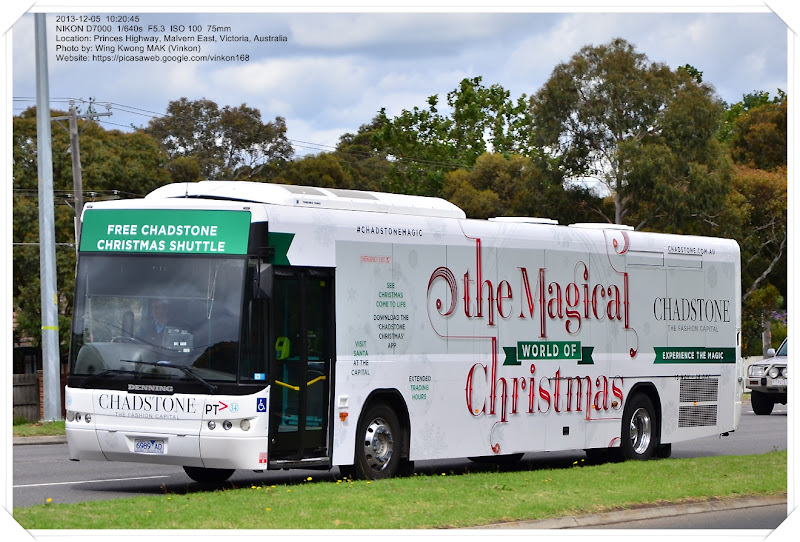 The service does strike me as a total waste of money.

If people aren't going to take public transport already, a shuttle bus running once a hour is going to do little to attract them to park several kms away - the staff shuttle between Chadstone & Holmesglen TAFE carpark works fine as there is a bus every 5 minutes, no need to plan your day around it.

If they wanted to provide something worthwhile, they should have funded extra 900 services between Caulfield & Chadstone instead - just 2 extra buses on weekends could have provided a 10 min service on weekends combined with the existing half-hourly 900, giving a proper carpark shuttle leaving Caulfield and providing a high-frequency link for those coming from the Frankston line and the inner suburbs.

This would also help ease the loads on the overcrowded buses departing Oakleigh Station, although a couple of shuttle buses between Holmesglen & Oakleigh wouldn't have gone astray either.

Extra 900's between Caulfield and Oakleigh would do the trick.
Top

Craig wrote:
This would also help ease the loads on the overcrowded buses departing Oakleigh Station, although a couple of shuttle buses between Holmesglen & Oakleigh wouldn't have gone astray either.

How would additional buses between Caulfield and Chadstone ease loads on overcrowded buses departing from Oakleigh when it is not even in that section?
All views expressed are strictly my own and do not represent my employer or anyone else.
Top

Craig wrote:This would also help ease the loads on the overcrowded buses departing Oakleigh Station, although a couple of shuttle buses between Holmesglen & Oakleigh wouldn't have gone astray either.

How would additional buses between Caulfield and Chadstone ease loads on overcrowded buses departing from Oakleigh when it is not even in that section?

People coming from the inner suburbs are more likely to stay on the train to Oakleigh at the moment as the 900 only leaves Caulfield every half-hour on weekends, (plus the hourly 624), whereas there are more services departing Oakleigh.

If there was a high frequency option departing Caulfield, people would be more inclined to get off at Caulfield for the connecting bus, leaving the Oakleigh option for those coming from the outer half of the Pakenham/Cranbourne line.

I heard a radio advertisement advertising Chadstone's "Magical World of Christmas" but it made no mention of the shuttle bus.
Top

I assume these extras are funded by PTV, as there are PTV posters at stations along the Pakenham/Cranbourne line advertising the frequency of services from Oakleigh, but does anyone know more?

It does not appear the limited shuttle from Caulfield is making a return this year.