And all accompanied by lots of really stupid negative comment. Its all getting pretty predictable and boring.

The NSW Opposition really needs a transport policy that they can offer as an alternative.

Note that the barriers on the Grand Concourse appear to have been moved. Any guesses as to where they will be?
Tony Bailey
http://www.transitaustralia.com.au
Top

Tonymercury wrote:
Note that the barriers on the Grand Concourse appear to have been moved. Any guesses as to where they will be?

At 0.17 get a quick view of the East end of the Grand Concourse
https://youtu.be/vC2nj3-JgbE
Top

Minister for Transport and Infrastructure Andrew Constance said the massive upgrade to Central Station represents the biggest improvement to the station in decades - making it easier for customers to connect between light rail, suburban and inter-city trains, the new Sydney Metro and buses.

“This is the start of Central’s long-awaited renewal, bringing new entrances and simpler interchanges that will make life so much easier for customers,” Mr Constance said.

“Central Station is the gateway to our great city, and we are working to develop a station that blends heritage with innovative design on par with other grand stations around the world.

“Labor failed to deliver Sydney Metro after promising it five times over 16 years in office. Next year, the NSW Government will open the revolutionary Sydney Metro in North West Sydney - transforming the daily commute for Sydneysiders forever.”

The Central contract includes:
· The excavation and construction of the new underground Sydney Metro platforms at Central beneath platforms 13 and 14;
· Central Walk - a new 19-metre wide underground concourse from Chalmers Street, connecting customers to suburban rail platforms, Sydney Metro platforms, the new light rail and buses;
· For the first time, customers will be able to use escalators to get to platforms 12 to 23;
· Completion of the Central Walk and Central Station metro upgrade contract is expected in 2022, with Central Walk open to customers.

Once the Central contract is complete, work will continue along the 30km length of the Sydney Metro City & Southwest project to lay tracks and fit out stations before services start in 2024.

This is the first step in the renewal of Central Station, creating a new pedestrian gateway to the east and better linking the suburban rail network.

Work to build the Sydney Metro platforms at Central will happen underground and during Sydney Trains' scheduled maintenance shutdowns.

“As customers get on with their daily lives at Central Station, the Sydney Metro platforms will be constructed right under their feet,” Mr Constance said.

“We’ll be working hard to minimise impacts as much as possible, but we are committed to making this station better, and easier to navigate for the hundreds of thousands customers who travel through it every day.”

The first part of the Sydney Metro City & Southwest project at Central has been completed with major construction finished on a rail access bridge which will be used to safely deliver Sydney Metro, and improve access for ongoing maintenance work at Central.

The bridge was built in 10 months and connects Regent Street with Sydney Yard, allowing trucks easy access within the confines of a working railway.

The first of five mega tunnel boring machine will be in the ground before the end of this year to deliver the twin 15.5km metro rail tunnels between Chatswood and Sydenham. 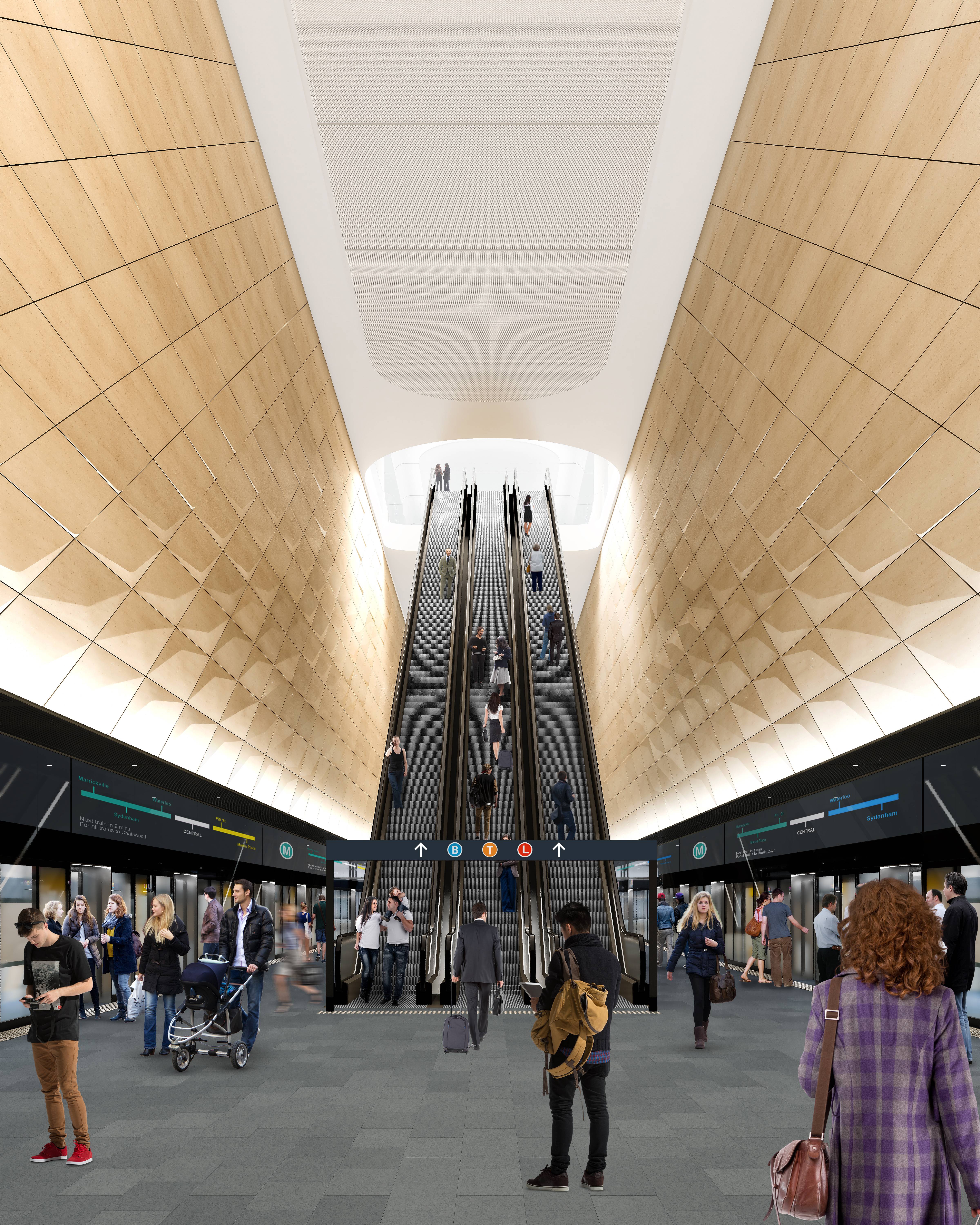 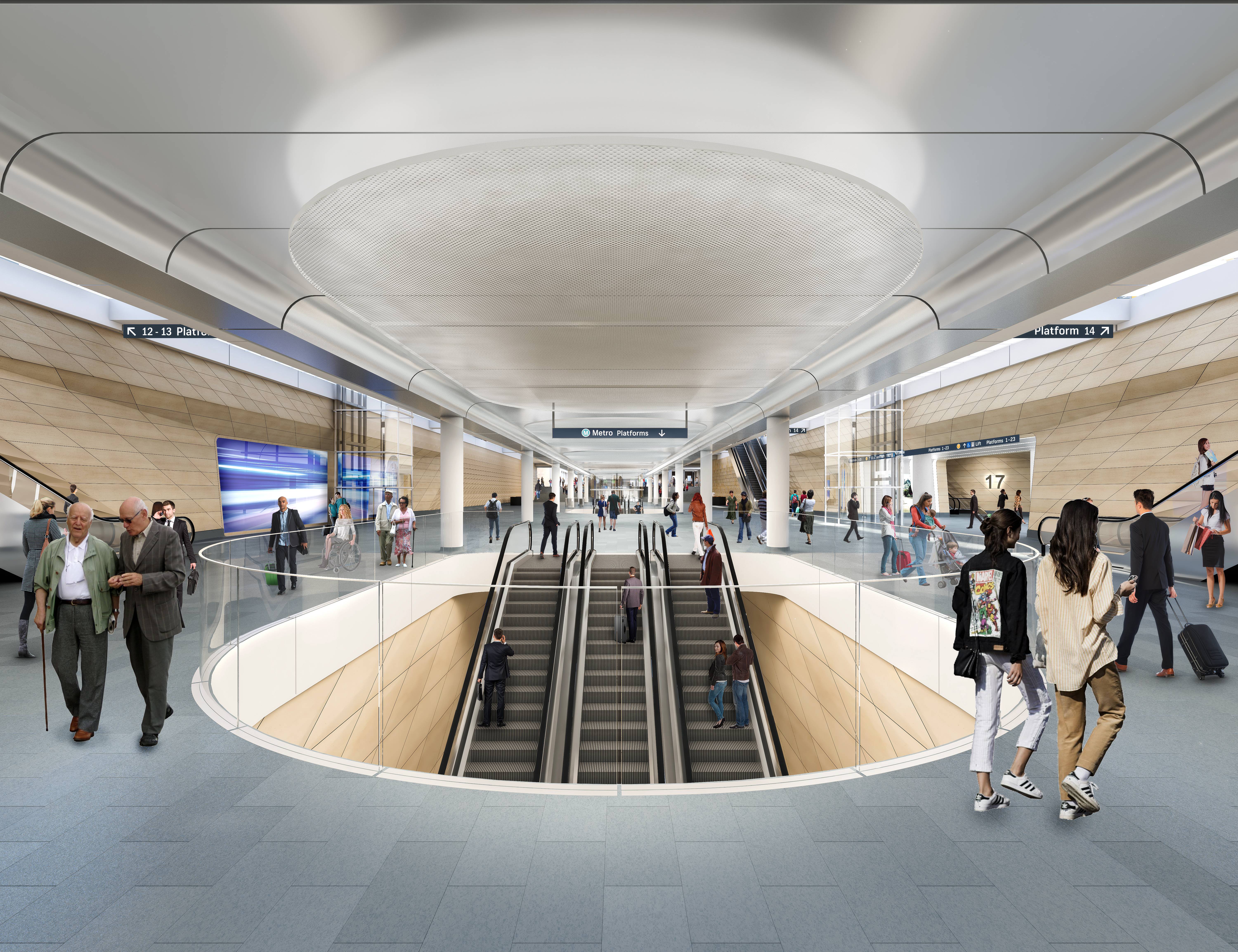 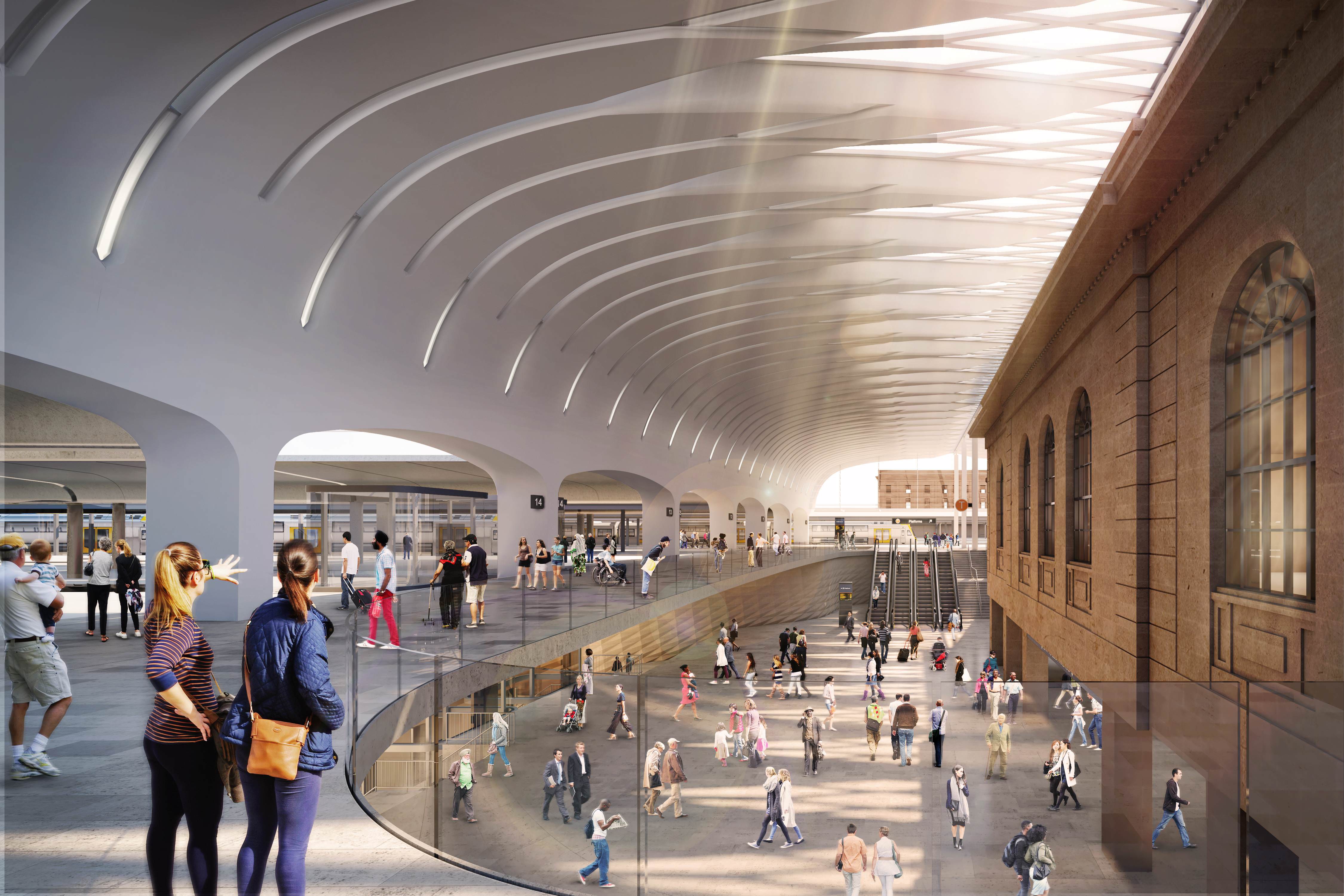 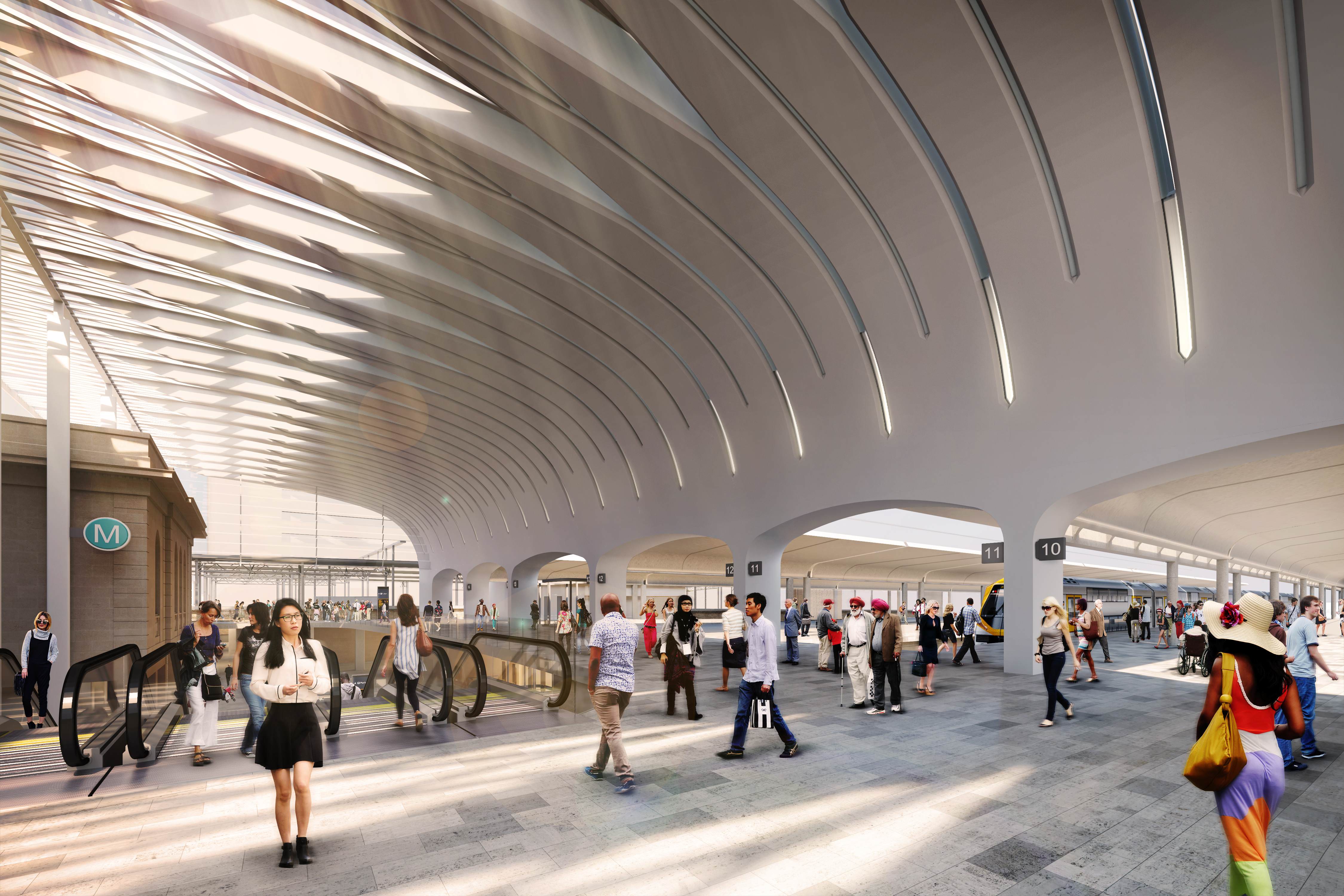 Some kind of dodgy illusion that people are walking from platform 13 over to platform 16, there.
Top

Just a note; the architectural firm attached to the design are the same firm that designed London's Kings Cross Station redevelopment: 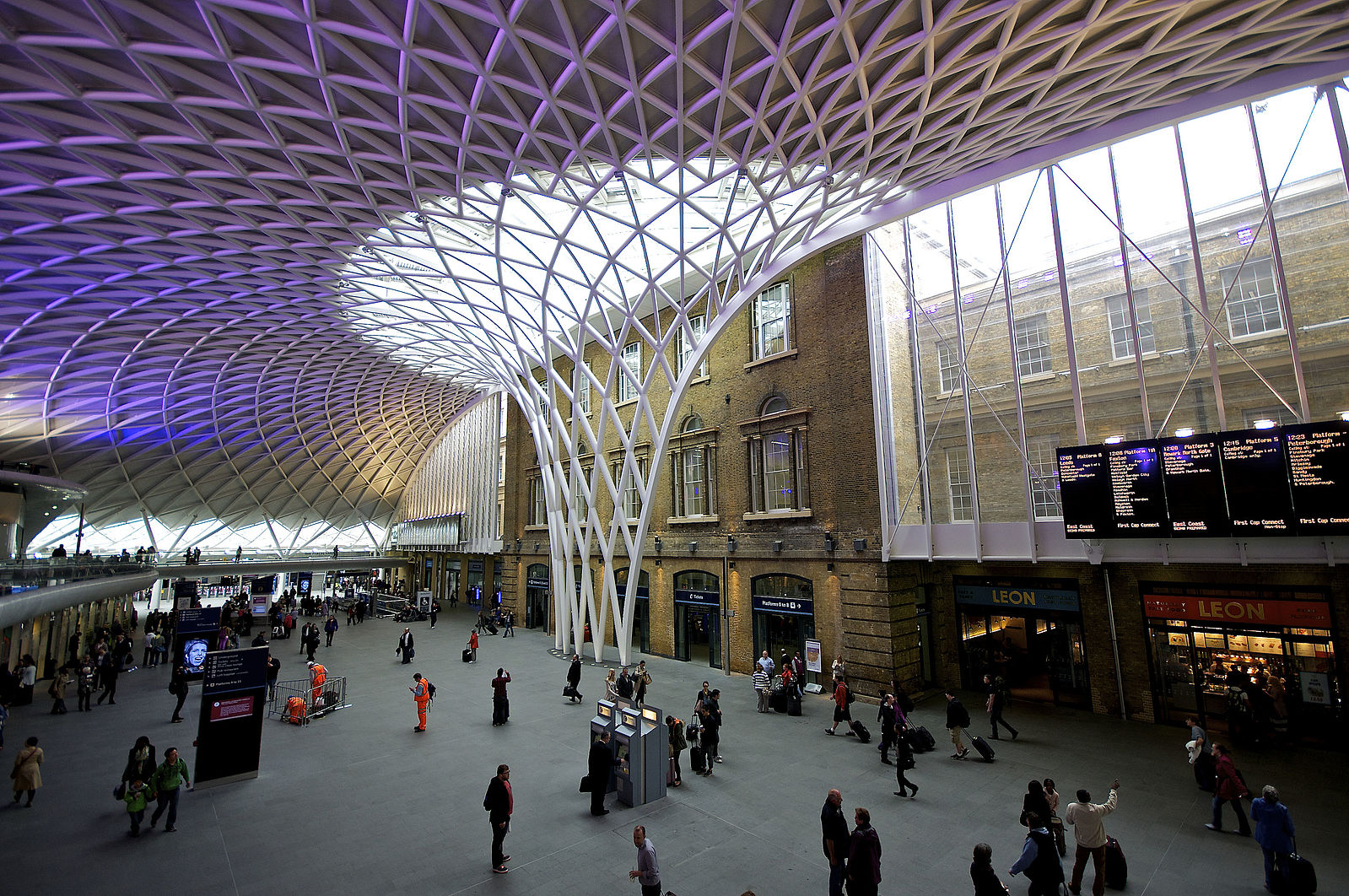 Note how they designed the roof so as to limit it's impact on the heritage facade. You can see a similar philosophy in the renders, with the new roof sweeping up and over the heritage structure at Central.
Top

The ramp from N concourse up to Chalmers St has been regraded to eliminate the steps. A handrail now separates the two different alignments. Opal gates are being installed half way along the ramp; there will be considerably less than at the current barrier.
The Sydney Classic and Antique Truck (and Bus) Show
On again June 2021
@ The Museum of Fire.
Top

Central station upgrade will need to service the next 50 years and with a growing and ageing population this needs to be taken into account now.

The North concourse generally have at the same time a group of older tourists standing in a huddle while regular younger commuters are trying to get past them.

My suggestion is to incorporate a wide Metro west platform with two big elevators connecting it to each surface platform and the NWRL metro as well.