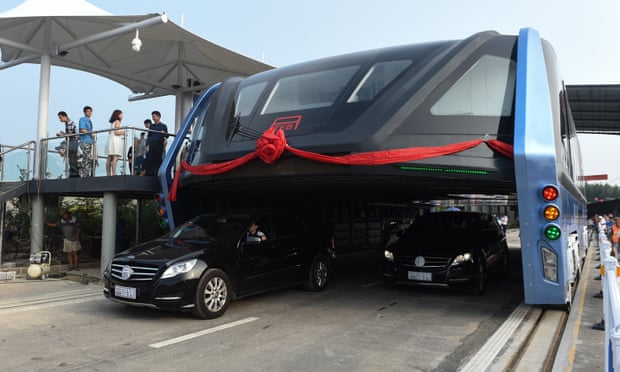 Just months after its spectacular design was unveiled, the Transit Explore Bus had its inaugural run this week on 300 metres of specially constructed test track in Qinhuangdao, a city in the north-east Hebei province, the BBC reported.

Bus that moves above traffic jams: model unveiled in China
The vehicle, which goes up to 60km/h (37mph), runs on tracks with passenger spaces standing two metres above the road so that two lanes of cars can pass undisturbed underneath, helping to alleviate the notorious traffic jams of China’s biggest cities. 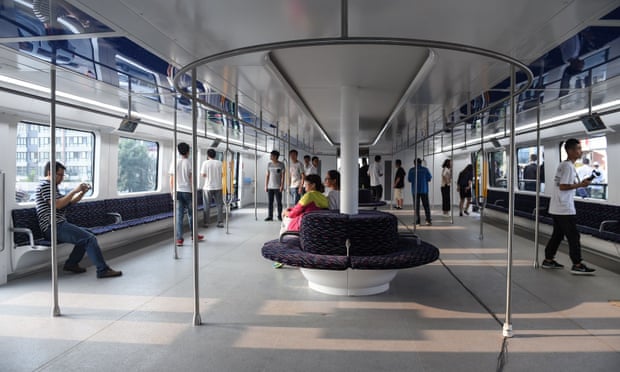 “The biggest advantage is that the bus will save lots of road space,” Song Youzhou, the project’s chief engineer, told Xinhua, China’s official news agency. He said the vehicle cost about a fifth as much as underground transit systems and could be constructed more quickly.

Song said in May that the buses, which are 21 metres long and more than seven metres wide, could transport up to 1,400 passengers. Several units can be attached to one another. One TEB could replace 40 conventional buses, he said. It is not known how the system would coexist with lorries and taller vehicles.

The world learned of the road-straddling bus when a model was showcased at a technology expo in Beijing in May. It generated enormous excitement in a country where traffic jams have grown as the country overtook the US to become the largest car market on earth in 2009.

It was noted that a similar design – also by Song – had previously cropped up at the event in 2010.

I have seen an artist impression of it in a magazine, and I like how it has turned out. It's official name is the 'straddling bus'.
[Insert Signature]
Top

OLYMPIAN wrote:The project is failed and now sitting in the depot collecting dust

Why'd that fail? I'm thinking that it's because of financial problems. Or maybe conflicts between the company that's constructing the straddle-stops?
[Insert Signature]
Top

Without knowing too much about it, I would imagine that it would require completely new sections of roadway to operate; you couldn't just plonk it down over an existing highway/roadway without massive alterations.

I just can't imagine car drivers "cooperating" in sharing roads safely with this sort of obstruction.
The Sydney Classic and Antique Truck (and Bus) Show
On again June 2020
@ The Museum of Fire.
Top
Post Reply
5 posts • Page 1 of 1